Exchange visits offer a bundle of benefits, well beyond just acquiring information. An intellectual and physical journey creates a common understanding, forges relationships in fun and hardships of shared experience, commitments to new approaches, and foundation for future networking. In abide to lay such foundations among its beneficiaries; National Association of Women’s Organisations in Uganda (NAWOU) organized a cross –learning and sharing of best practices on combating Female Genital Mutilation (FGM) exchange visit between 50 beneficiaries from Kween and Amudat districts from 15th to 16th March 2022.

The visit engaged anti-FGM mentors, former cutters (Kokomelkongs), Community Based Action Teams (COMBATS) district officials, SAGE beneficiaries, religious and cultural leaders from both districts where they shared lessons, emerging issues and recommendations on how they can collectively fight FGM and early child marriage in their respective communities. The two days learning session yielded commitments and collective action to end FGM among the Pokot and Sabiny because it was realized that the harmful practice is deeply-rooted in both cultures.

The Amudat team shared the origins of the fight against FGM, challenges faced, and how they are still continuously trying to overcome these challenges. One of the key strategies highlighted to combat FGM is investment in education. Sanayi Women’s group was formed to create awareness among the women on the dangers of FGM and encourage them to invest in education.

“We took our children to school because we knew it’s through education that children can resist the vice of FGM. This meant that change had to start at home. Of course we faced resistance from the men and the kokomelkongs who were reaping big from the practice financially and, on the other hand, respect”, stated Paulina Chepar, Chairperson Sanayi Women’s group. And this birthed more women groups like Maendeleo Women’s group and Linyoi group.

With support from different organisations and government, more people within the communities started seeing the importance of education and embraced education as one way to end FGM. Through these community awareness sessions, more women were inspired to seek financial impendence in order to pay school fees and support their children as many of the husbands were still against the idea of their girls going to school.

The team from Kween also acknowledged the importance of education, constant sensitization and sharing of knowledge on the dangers of FGM and early child marriage. They also highlighted the significant change seen with the incorporation of the translated and simplified FGM act of 2010 into the local language. The two groups however concerted that men are perpetrators of FGM in both cultures, so they should be more engaged in the fight against FGM.

During the dialogue with government officials from the two districts, Juma D. Chepsikor principle Community Development Officer Kween district shared what he learnt and requested the Amudat team return the favor of visiting Kween to learn from them too.

“The resolutions that stood out for me were the proposals to reduce dowry for the mutilated women/girls, formation of groups and supporting them to upgrade to Community Based Organisations (CBOs) that advocate for ending FGM,” stated Juma.

The Resident District Commissioner (RDC) Amudat Micheal Bwalat accentuated the relevance of education in ending FGM. He also congratulated the former kokomelkongs on their transformation and encouraged them to use their networks to create more awareness.

“I appreciate the COMBATs and NAWOU for championing the fight against FGM and I’d like to express my gratitude to the Pokots who are always willing and ready to discuss social issues with no demands. FGM requires involvements of all players, and therefore I call upon everyone in their capacity to play their part to ensure we end this vice in our communities.”

The activity was concluded with several commitments being made like community members agreeing to celebrate uncircumcised girls by paying more dowry and having an alternative rite of passage ceremony, the Deputy Police Commander, SP. Hillary Mukiza and District Internal Security Officer, Richard Mugogoto committed to taking action against the perpetrators of FGM through summoning them for peace talks, following up on cases reported and fail ure to comply with the law will lead to arrest.

The visit merged two NAWOU projects; “RISE UP: Mobilizing women and girls to combat FGM & CEFM in Kween, Eastern Uganda” project funded by Womankind Worldwide and “Accelerating the Protection of the Tipin and Kor’s Rights” project funded by Embassy of Ireland. 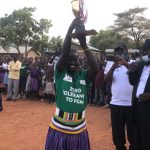 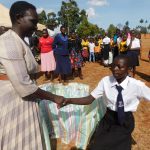 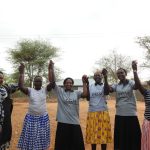